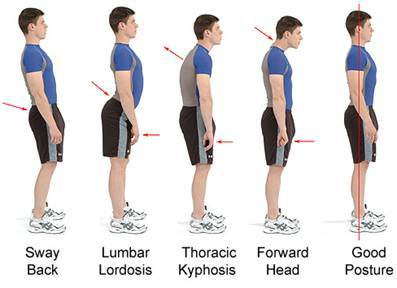 This blog article was written and supplied by Pete Woollhead

Western populations are becoming increasingly swarmed by postural related conditions. Due to the increase of sedentary lifestyles in western populations, many people are experiencing recurring acute and chronic lower back pain and neurological symptoms that can be considered highly dysfunctional.

Often the pain patients’ will experience can be due to an incorrect training strategy, which alters the musculature which attaches to the skeleton; hypertrophic training will therefore have a pull effect on the joint fulcrums of the skeleton and alter their posture. Due to muscles working in an agonist/antagonist (push/pull) fashion, this pull effect unfortunately affects the opposing antagonist musculature that has no option but to relax and lengthen, which usually is combines with a weakening or atrophy effect of the muscles. Common areas include rounded shoulders due to pectoralis major/minor hypertrophy; kyphosis in the thoracic spine from abdominal hypertrophy; and pelvic tilt from hip flexor hypertrophy. To an uneducated ‘weekend warrior’ type athlete, this particular type of training can have a detrimental effect on their future performance and risk of injury. It also impacts the need to train correctly. As the body is able to adapt comfortably to demands placed on it, often the poor posture has been a progressive part of their make-up, unconscious and unrecognised. The risk of injury is high, mainly due to the musculature imbalances that result; muscle strains and spasming are common and often follow a specific pattern.

Just as commonly, poor posture can be related to a psychological/learned behaviour cause. As children there is a strong emphasis on ‘talking when you are spoken to’ and control, this continuous negative reinforcement can actually create unconscious tension within muscles, particularly around the jaw, upper trapezius and neck muscles. If children are encouraged to ‘be quiet’, when/if the urge to voice an opinion is raised, they may ‘learn’ to supress and unconscious tension will create chronic tensions in the said muscles. In many cases, this early-learned behaviour can still be present as people age, particularly in introvert populations, especially if they are within a hierarchical occupation where levels of authority are in place, and the same tension reaction to authority can impact on the introverted posture which can bring unwanted upper back and neck pain

Another cause of poor posture can be due to sedentary lifestyles. Western populations have in some ways an ‘epidemic’ of inactive occupations, where it is commonly considered detrimental to posture; due to the common focus being on a computer screen, with the arms and neck in flexion, this encourages an increase of kyphosis in the thoracic spine, lumbar lordosis and rounding of shoulders to obtain a ‘comfortable’ sitting position. Many people then travel from their sedentary occupation, where they have been sitting all day, and relax at home in front of the television in a seated position.

All three causes of posture have the same neuromuscular outcome. It becomes ‘a relatively permanent change in behaviour as a result of practice’. A neuro-physiological feature termed ‘neuroplasticity’ occurs constantly throughout life; it is the thinking that the brain is dynamic and has the ability to adapt. It relies of ‘neural maps’ that are situated in the sensory cortex within the cerebrum of the brain and the body is constantly sending ‘sensory feedback’ to the sensory cortex. An increase in sensory feedback increases the representational patterns in the sensory cortex. This is what makes learning possible; be it functional or dysfunctional. For example a dysfunctional learned response to training the pectoral muscles is a greater sensory representation of them, which allows for the increase in tone and encourages rounded shoulders. If this pattern is encouraged over time then the ‘neural map’ of the shoulders will remain rounded; resulting in adapted posture.

The dynamic capacity of the brains representation of the body can be seen from work with paraplegic patients experiencing vivid phantom sensations of removed limbs. They reported a change in sensation over time, describing a telescoping sensation of the limb, for example, the hand will be felt as a size of a stamp, just below the elbow. This is an example of un-learning effect, and the neuroplasticity of the brain adapting to the absence of sensory input over time.

Posture can be considered an aesthetic presentation of oneself; consider a depressed, unhappy character who has his head hunched over and shoulders rounded; this poor posture mimics the posture of learned poor posture through incorrect training, this can therefore not only have a detrimental affect on performance and function but also an affect on how people present themselves, their confidence, even if they are not shy and unhappy, they may come across as this due to perception of body language. Now consider a confident and happy individual; shoulders back, chin up, good strong stance, this individual will be perceived as a confident person without any investigation into their personality.

As a Physical Therapist its important that we investigate the cause of the condition, usually a patient will present with a bad back, and it will be observed within a physical examination that he has poor posture. Modern therapy strategies encourage what is known as a holistic approach to therapy, so the Physical Therapist will also do a ‘subjective assessment’, this is a verbal discussion around the behaviour and causes of the condition that gives the Therapist clues to what the overall cause is; be it occupation, incorrect training etc. The result of poor posture is usually a bad back, but the cause of the problem will not be fixed unless fully understood, this can often be a cause of many chronic back pains, once the overall cause is determined and treated there will be no reason for the bad back any longer and management of the condition can progress.