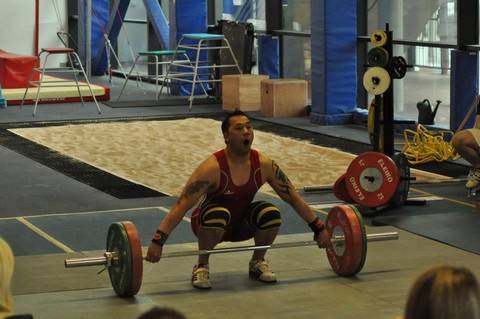 In the last year whilst working in Glasgow I’ve had the pleasure to be coached from my friend and Scottish National Weightlifter Andy Tsang. Andy is a skilled competitive weightlifter, incredibly knowledgeable trainer and one of the co-owners of Varsity Gym in Duke St Glasgow. We frequently chat about various training methods and diets fads that have “appeared” on the fitness scene on a seemingly monthly basis. Below is Andy’s recently posted wise words which he has kindly permitted us to share.-

“I try to stay away from getting involved with debates concerning which way is the better way to train. I always feel people tend to have a biased opinion in regards to methods. Recently after seeing more and more people post about certain training methods (which by the way are absolutely atrocious! and the person who thinks these methods are good should go and get their head checked!), I feel the need to give my two cents worth.

Do you, when you paint a wall throw buckets of paint at it and think if you throw enough, it will eventually be covered and in the colour you want? No you don’t. Firstly there would be all sorts of wasted paint, time, money and not to mention a major cleaning job! So when people train why do they think that is the best approach to training? Throw a bunch of exercises, sets and reps together and as long as you do enough you might be able to get the results you desire. Sound familiar to you? Training and programming for me should be purpose based.

Science, evidence based and practical experience – Understanding science, research and keeping up to date will pretty much straight off the bat rip most fads and gimmicks to shreds and keep you on the right path. It will also answer questions for you when information becomes skewed or you are not sure about things. We try to use an evidence-based approach coupled with in the trenches logic. This way we know we won’t stray too far away from the truth. What exercises activates the glutes more? Does multiple sets produce better hypertrophy than single sets to failure? What is work capacity, fitness and preparedness? You could go on and on and from experience PEOPLE ONLY GIVE OPINIONS, not research based logical thinking.

SAID principle – This means specific adaptations based on imposed demands. The body will adapt based upon what type of stresses you put on the body. Squatting heavy means you will get good at squatting heavy weight, hitting golf balls often means you get good at hitting golf balls often, running means you get running fit, cycling means you can get cycling fit etc. Get the picture? This goes back to my point, fitness is specific to task. If you are a runner and you are trying to get running fit then going for a cycle isn’t really the best option for you. There is a thing called training transfer and sure it might help but honestly without sounding too sarcastic, go for a run. That is probably the better option. Doing a high intensity circuit class probably won’t be that great. This brings me to another point, when there isn’t a sport involved then for the average Joe, we don’t really give two shits whether we can sprint 100m in record times and cycle a million miles and speed skate around the Antarctic. We just want to be generally fit. Now when people start throwing a bunch of exercises together just because they know it’s hard or you can get a beasting is believe it or not, the best approach. Especially when there is no logic behind it, just like the throwing paint on a wall approach. Again, it goes back to keeping to science and logic, taking an exercise that was designed for a certain purpose and using it for another is stupid. Take the Snatch for example, aside from the fact it is part of a sport, it is often used a power based exercise. It is also anaerobic in nature and can be used to develop the speed/strength continuum and is also very technical. You have to be kinaesthetically aware in order to perform them correctly. This takes a long time to develop the skill. So gathering all this information, would it be sensible to rep this exercise for time especially if the person is not technically sound? As a competitive weightlifter (albeit average) even I break form after a couple of reps. Anyone who’s got half a brain on them will obviously say it is ridiculous. No? How about this? The purpose of sprinting is to accelerate and hit top speed over a short distance and in a short period of time. Again, it is anaerobic in nature and utilises large amounts of force in a very short time frame. So what if I say to you that you need to hit top speed and run a marathon and you are not allowed to slow down? Firstly it is impossible and downright stupid especially if you understand energy systems. Now think about people who put programs together. How often do you see a bunch of random exercises put together and done for a million reps for the sake of it. Then call it a fancy name or take something out of context and use it for another purpose? It really annoys me how the industry has become this way, full of fads, opinions and pseudo-science. If they are using a certain way of training for fat loss, sport or general fitness do they actually understand how to actually do it? Are they well versed in the literature and use not only an evidence based approach but logical and keep to a few certain principles? Is their exercise selection based on individual needs and chosen based on analysis?

Safety – This is an obvious one but for some reason people in the fitness industry seem to get wrong. Here’s an example, John wants to get stronger legs and back because of previous issues. He has previously had lower back issues, 2 herniated discs and has nerve damage. Is it wise for him to do spinal loading exercises? Is vertical loading or horizontal loading appropriate? What exercises are counter-productive? What is the risk to reward in the selection process? Sounds so simple yet people can’t seem to get this right. I know I used an exaggerated version but even in simple stuff people still don’t get it. Is there a better alternative? You would be surprised at the amount of people doing foolish stuff. Understand the risk to reward.

Understanding and always basing your approach on clients/individual goals and needs is key, don’t do stupid and foolish stuff. Above all else, look at compliance. You could write the best program in the world but if people don’t want to do it, it isn’t worth the paper it is written on. Make sure every client or trainer is involved and understands why you are using a certain approach and agree to it. This is what we try to do at Varsity. ”