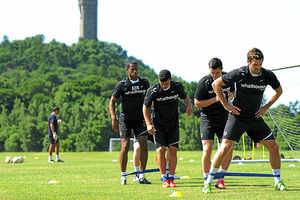 I thought I’d share this blog again to coincide with most teams starting pre-season training this week. I have witnessed many weird and wonderful pre-season training methods that are supposed to enhance the fitness of the football players doing such activities.

One such activity witnessed at a professional football club was running backwards up a hill then sprint recovery to repeat another common activity is running through sand dunes beaches etc.

Yes these are difficult and physically taxing activities but do they actually enhance the the performance of the players involved? When asking some football clients of how their injury, especially soft tissue (muscle/tendon) occurred. Unless it was an impact /direct injury, it was more than likely an overuse syndrome perhaps related to a certain activity to which their body wasn’t familiar to.

Therefore increasing the intensity on muscle groups at a range they are not familiar with may actually increase the likelihood of injury rather than increase fitness levels during pre-season training.

A properly structured pre-season training programme can make all the difference to grassroots players and teams. Just don’t leave it too late!

Your lungs are burning and you’re gasping for air. Your face matches this season’s new burgundy kit and your heart is trying to beat its way out of your chest…

The first match of the season is just ten minutes old, and you’re beginning to regret your summer rooted to the sofa, or the bar stool, watching the World Cup and eating microwave pizzas.

While kick-abouts in your local park can keep your fitness ticking over, they are no substitute for a properly structured pre-season training schedule. We have used both 3 week and 6 week pre-season training plans, designed to get grassroots players or teams in peak condition for the start of the season.

The idea was to devise a realistic training programme for the sort of amateur footballers who would like to be fit for the start of the season but are, in practice, more likely to be found in the pub than the gym on a Friday night.

The result is two alternative programmes – a six-week programme and a three-week one. Which is the right one for you will depend on factors such as your own level of commitment, what other training your club does or doesn’t lay on and precisely what you hope to achieve.

The six-week plan is for individual players whose clubs, like many grass-roots clubs, don’t run any kind of pre-season training. It is designed for players to do on their own or in small groups of team-mates, either at home and in the local park.

It is even something that coaches who can’t get their squads together for a proper pre-season regime can email or print out and post to all their players, suggesting that they use it individually to get fit for the new season one their own.

The second programme spans three weeks, and is for players who want to have given themselves a head-start when their club’s own pre-season training begins. It is designed to build up fitness, muscle-strength and endurance that will both lessen the pain of pre-season, and give individual players a potentially crucial head-start over possible rivals for their place in the starting line-up.

The real beauty of both the six-week and the three-week programmes is that neither of them require any expensive equipment, such as weights or bleep machines. All you need is a park with a football pitch, a decent pair of trainers and a couple of hours a week.

Get in touch if you’d like details of the 3 or 6 week pre-season programme.

I think the key to this topic is specificity – is the exercise or training session specific to the athletes chosen sport?  If not…?